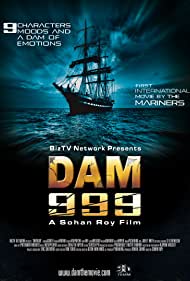 This fictionalized historical thriller interwoven with Hindi cultural meaning is a tribute to the approximately 250,000 people who lost their lives in the world’s worst, man-made dam disaster in 1975 in China. The story of the collapse of the Banqiao dam was not revealed to the world for over 15 years. With a toll worse than that of Hiroshima and Nagasaki, this film tells that story with The message: The same thing could happen elsewhere in the near future. Dam999, a fact worth waiting for.